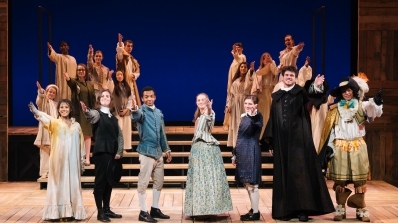 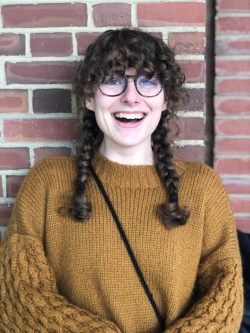 Kate Budney '21: creator/collaborator, Asynchronous Mission #6. Kate (she/her) is a senior theater major with an education minor from Hanover, NH. In the theater department she has primarily participated as a performer (Hair, Into the Woods, Cupid and Psyche, Dance Nation), but she has also loved working in stage management and as a props master for several shows. She also serves as the 20-21 Department Student Representative. Kate spent her off-terms interning at Target Margin Theater in Brooklyn, performing in The Sound of Music at Northern Stage, and working as an E-Termer at Northern Stage, where she performed in King Lear, assistant directed a teen production of Metamorphoses, and led a group of friends in creating her first devised piece, Egg. Kate has tried to make the most of her COVID senior year by joining the Dartmouth Dance Ensemble, honing her baking craft, and fostering cats. She feels especially lucky to get to spend her last terms at Dartmouth doing a thesis in devised theater with some of her very best friends. 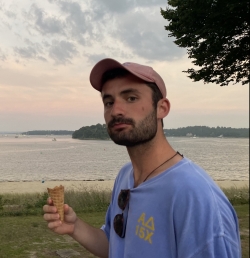 Matt Haughey '21: playwright, composer, music director, Flourtown. Matt will be graduating this Spring with majors in Theater and Economics. He is a singer / songwriter with over 1 million streams on all platforms. Matt's latest release, 'Sorry', streamed over 150,000 times in the first week. His songs 'Make You Happy', 'Movie Love', and 'Ocean' have all been featured on Sirius XM The Pulse. His love for musical theater and storytelling have had a significant influence on his music. At Dartmouth, Matt is a member of The Dartmouth Cords a capella group and the Dog Day Players improv comedy group. He played Berger in Virginia Ogden's senior thesis production of Hair and The Mysterious Man in Dartmouth's Mainstage production of Into the Woods. Matt has been working on Flourtown for 4 years, and he is beyond excited to finally share this show with the world. 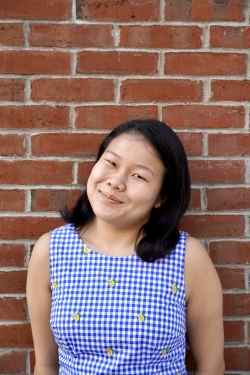 Naomi Lam '21: playwright and performer, Literally Obsessed / playwright, Family Style. Naomi is a history and theater double major. In high school, she joined the drama club to confront her fear of public speaking. She's been in love with theater ever since. Previously, she has acted in Medea (17F), Hair (18S), The Bald Soprano (19W), Trivia Champion (19X), and Lost Angeles (19X).  She also co-directed Voices 2021 and was the stage manager for Faith, Hope, and Charity (20F). At the start of the pandemic, Naomi assembled and edited a podcast about student experiences, entitled Vox Clamantis in Covid. Naomi's more recent passion has been playwriting. Her one-act, Spaceship 99, was the Ruth and Loring Dodd Playwriting Contest 2020 winner and she wrote and performed a solo show this spring entitled, Literally Obsessed. Her most recent project is her honors thesis, Family Style, a play about immigration and assimilation. Outside of theater, Naomi is involved with the Dartmouth Glee Club, the Office of Pluralism and Leadership, and Epsilon Kappa Theta. Next year, she's headed to Boston College Law school. 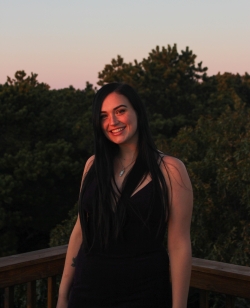 Savannah S. Miller '21: playwright, Jane. Savannah is a senior Theater major and English and Russian double minor at Dartmouth College. While she enjoys acting and stage management, Savannah's focus is on playwriting. She has had three original plays produced through the Dartmouth College Department of Theater: The House (Eleanor Frost Playwriting Contest Winner, 2018), Trivia Champion (2019), and Little Circles (Eleanor Frost Playwriting Contest Winner, 2020). The House was also selected as one of two plays for Washington, D.C.'s Young Playwrights' Theater's year-long development process in 2020. Savannah has experience in stage management, working as an assistant stage manager on the Dartmouth College Theater Department's Cabaret (2017) and as stage manager for Dartmouth Idol with the Hopkins Center for the Arts in 2020. As a theatre artist, Savannah has worked with different theatrical organizations, including the New York Theatre Workshop, the Smithsonian's Discovery Theater, the Stratford Festival, the Women's Theatre Festival, and the Virginia Theatre Association. After Dartmouth, Savannah plans to attend graduate school for playwriting and pursue a career as a writer and arts educator, but not before spending two years with Teach for America in Charlotte, NC. For more, please visit savannahsmiller.com. 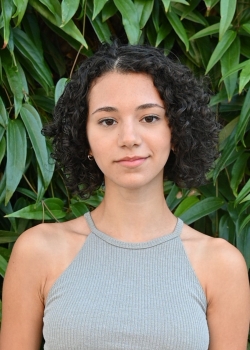 Lexi Warden '21: director, Bulrusher. Lexi is a modified major from Seattle, WA studying theatre and African and African American studies. Roles with the Department of Theater have included 'This Lady' in Citrus (18S), 'The Narrator' in Into the Woods (19W), and a member of the ensemble company for The Radical Joy Project (21W). She also worked as an assistant stage manager for Eclipsed (18F) and as assistant director on Faith, Hope, and Charity (20F). Beyond Dartmouth, Lexi continued her involvement with Citrus at Northern Stage as a member of the cast during its New Works Now reading in 2019, and subsequently as the assistant director and choreographer for its world premiere in 2020. An extensively trained dancer, Lexi was also involved with the Dartmouth Dance Ensemble's productions of Petrushka (18S) and Unfurl (19S).