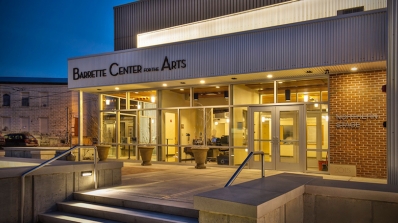 "The support I've been given, the connections I've made, and the friendships I've found are gifts I will forever cherish. This term will go down as my favorite at Dartmouth."

"I have more confidence to launch myself into this industry with an open-mind, rig- orous discipline, and support from those I met along the way."

"The E-Term not only provided me the op- portunity to work with professional artists in a capacity I never had, but also get to know and learn from them. The diversity in experiences showed me that there is space for me to follow my own artistic voice in the professional world.

"The most impactful part of the E-Term was my Passional Project. The whole process was satisfying and fulfilling. I felt constant support from everyone at Northern Stage."

"I gained in-depth knowledge about how a regional theater is run and a new passion for theater education."

"The E-Term program between Dartmouth and Northern Stage was a critical component to my education at Dartmouth. Theater is a discipline where you have to learn by doing. The E-Term allowed me four months to be on the ground every day learning about all of the different aspects of theater. I worked with professionals from administration to sound design to acting and we had masterclasses with incredible people working at Northern Stage. Everyone had so many experiences to share and so many things to teach me and I gained mentors and experiences, on and off the stage, that changed my outlook on my future. This program helped me to realize that theater really is the discipline in which I want to pursue a career. I got to live the daily life of a theater maker and that experience has changed me forever. Living in New York for a month was a crucial experience that I never would have had without this program. We got to live in housing that was found for us and have a job already when we got to the city. I learned more in these four months from all of the incredible mentors than I could have ever imagined going into the program. I would highly recommend this program to any students at Dartmouth studying theater. It is a crucial supplement to our education in the theater department at Dartmouth. Northern Stage's mission is "changing lives, one story at a time" and this is a statement that will stay with me forever because working there changed my life. I got to spend everyday doing what I love with people who supported me to learn and grow in ways I never would have been able to without them."

"The E-Term was one of my most valuable Dartmouth experiences. I only became serious about pursuing theater as a career during my Sophomore year, so the world of professional theater was both new and daunting to me when I started the internship. I had never done any regional theater productions as a child, as some have, or even worked in community theater production. All of my theater experience before the E-Term came from school productions and summer camps, which, no matter how fulfilling, can't quite replicate what it's like in the real world. This e-term gave me the chance to really begin to understand how the real world works in this profession. Being around professional actors, you hear and participate in conversations about things like Actor's Equity, graduate schools, auditioning, living in New York, and more. As I lived with these actors and worked with them both backstage and onstage, I really solidified my commitment to the theater and began to craft a plan for the next couple years with a much more informed perspective than I could have hoped to have without making those connections. But even if a student weren't ultimately going to pursue theater as a career, I believe the e-term would still be unbelievably valuable. Knowledge of the intricacies of the theater world was merely one benefit of the experience. I was also given the opportunity to work on a professional show and act alongside very experienced actors, to work backstage Off-Broadway, to live in New York and take advantage of all that it has to offer (voice lessons, dance lessons, seeing shows on our nights off, etc.). I am a better performer for having had those experiences, but more than that, I think I am also a better collaborator and leader because I am more able to bring the level of professionalism I became accustomed to throughout the E-term to everything I do. If a student wants a career in theater, I think the e-term is essential. If a student just wants to grow as a performer, as a student, or as a leader in the department, I think the e-term is also a truly exciting learning experience and will give them the tools to make the most of their Dartmouth education. It is a rare and wonderful opportunity, and I hope that future students will be able to have this experience."

"The E-Term is the singular experience I credit with preparing me for a life in the professional theater. I came to Dartmouth because of its exceptional theater program—it far surpasses any other school in its league in talented faculty, commitment to students, and available resources—but until the E-Term I did not fully realize the extent of the department's ability and commitment to preparing its students for a theatrical career. Nowhere else does there exist a program that allows students the opportunity to live and work as a professional actor within their undergraduate education, an experience with both tangible and intangible effects. The tangible benefits took forms like Equity Points, which give me a considerable head start on my professional acting career, and a show on my resume with one of the country's hottest young directors, Stephen Brown Fried. However, what I will remember and take away from the program are the intangible effects. The E-Term threw me into the deep end like I never had been before—almost immediately, I found myself in a cast of the most professional and talented actors I had ever worked with and being asked by one of the country's top classical directors to keep up. That experience and the things it taught me about myself as a theater artist and as a person will stay with me through my years of making theater to come. In addition, I acclimated myself to a professional schedule, made connections with theater artists in every division, created and practiced a preparatory acting process, and learned the ins and outs of a professional theater. However, most importantly, I was trusted by the Dartmouth faculty and staff at Northern Stage with an enormous role and responsibility while still supported by that faculty and staff in a way I would not be in the real world. That, to me, is the crux of experiential learning. If this program existed at another school or before I applied to Dartmouth, my decision would have been much easier to make—this unparalleled experience further makes Dartmouth theater a standout among similar institutions and will attract passionate, dedicated theater artists interested in learning from professionals and expanding their career opportunities to this campus. This term was paramount to my theater major and my Dartmouth experience."

"During my three months, I designed and led a class titled "Build a Scene," where 9-11 year-old students from around the area were taught improvisation and then used it to create a written scene. They performed their final scene for their parents and Northern Stage directors and faculty! In addition to teaching a class, I led several improvisation workshops and assistant directed two productions, Blithe Spirit and the world premiere of Orwell in America. It was extremely informative, helpful and unique to be a part of such incredible rehearsal processes. Since Orwell in America was by a local professional playwright, ​Joe Sutton, he was able to sit in on rehearsals, which was entirely different. The play changed before my eyes. Similarly, I read for the new play festival, and that was a constantly evolving body of work that I was fortunate enough to experience. All in all, I look back at my internship and am in shock how much I was able to do and experience. Based on this internship, I hope to pursue directing professionally and am hoping to be in New York, Chicago or Boston next year. Love you, Northern Stage!"

"It was a breathtaking experience to share the stage with so many inspirational actors, including another Dartmouth alumnus and two Dartmouth professors!"

"Being asked to join the staff at Northern Stage this year has been an exciting new chapter in my professional life, and one that has reminded me of and further galvanized my dreams of one day running a regional theater. I have loved working at a place so integral in a community, that is using art to make the world better and brighter."