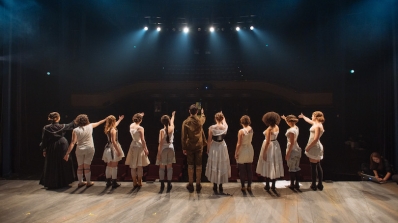 About our Production Program

Theater is one of the oldest undergraduate activities at Dartmouth; our production program is built on a tradition dating back as far as 1779. The first Director of Theater was appointed by the College in 1928, and the Department of Drama (now the Department of Theater) was formally established in 1967.

The department's production program includes a wide variety of forms and genres ranging from traditional scripted plays to musicals to experimental devised pieces. It also embraces the development process of new work, allowing playwrights to hear their work in readings, workshops, and full productions. This heterogeneous mix provides countless production opportunities for our students throughout the academic year.

The department produces a faculty or guest-directed and designed MainStage production each fall and winter term; we also produce any number of student-driven performances and productions each term: works conceived, directed, performed, and/or designed entirely by undergraduates. Summer months are given over the annual Summer Theatre Lab, which includes the Frost & Dodd Student Play Festival, VoxFest, and the performances of the New York Theatre Workshop's annual Dartmouth residency.

The creative arts are at the core of a liberal arts education, and we are passionately committed to openness as a department. Production involvement, both onstage and backstage, is available to all Dartmouth students regardless of either previous theater experience or major. Non-majors regularly participate in our productions as actors, run crew members, assistant stage managers, designers, playwrights, and more.

During the first week of each term, the Department of Theater hosts a Theater Showcase in the Bentley Theater. Open to all students, the Showcase is an opportunity for students across campus to learn what productions and performances are in the works for that term, and how they can get involved either onstage or behind the scenes.

For additional information on production opportunities please visit the "Get Involved" section of this website, or email Department Administrator Greg Potter or Production Manager Brianna Parry.