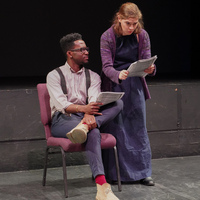 The Other Girls
The story of three college-aged women grappling with the intimacy and intensity of female friendships. 'The Other Girls' investigates indistinctions in adoration, admiration, and attraction.

Seismic Change
Zoe wants someone, literally anyone, to take her seriously. Gideon wants to avoid another PR disaster. Ken doesn't want to retire. Helen got her PhD but maybe hates science now? Jason was not told public speaking would be mandatory. Isaiah simply wants the dioramas to come alive at night. It's just another stress-free day at the natural history museum! The museum will definitely not be underwater by 2050 if nobody does anything about climate change. Absolutely not. Everything's fine! Make sure to visit the gift shop before you leave!

ABOUT THE FROST & DODD PLAYWRITING COMPETITIONS AND STUDENT PLAY FESTIVAL