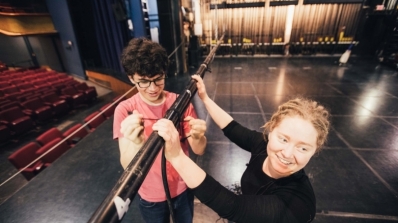 Buoyed by “misinformation” and “alternative facts,” the current political regime’s attacks on our democratic institutions have thrust George Orwell’s classic dystopian novel, 1984, onto the bestseller list once again. This fast-paced, mixed-media adaptation investigates Orwell’s 20th-century prophecy in the context of 21st-century America, and asks the question: “Are we there yet?”

Please join us for a celebratory reception following the show. Cash bar available, courtesy of the Top of the Hop Lobby Bar. This event is generously supported by the Hopkins Center and the Adams Family Fund for Theater.

Pre-Show Discussion: Fascism, Resistance, and the Politics of 1984
Saturday, February 17
7:00 pm @ the Top of the Hop

Join Professor Mark Bray and 1984 Director Peter Hackett for a conversation focused on the significance of 1984 within the context of our current political climate. Professor Bray is a Dartmouth visiting scholar and the author of Antifa: The Anti-Fascist Handbook. He specializes in the history of human rights, fascism, terrorism, and political radicalism in Modern Europe. Peter Hackett is is a Professor of Theater and the Avalon Foundation Chair of the Humanities. The conversation will be moderated by Laura Edmondson, Theater Department Chair. Free and open to the public.

Post-Show Discussion with the Cast
Friday, February 23
The Moore Theater

Join us in the theater immediately following the evening’s performance on Friday, February 23 for an informal discussion with director Peter Hackett and members of the 1984 cast and company.