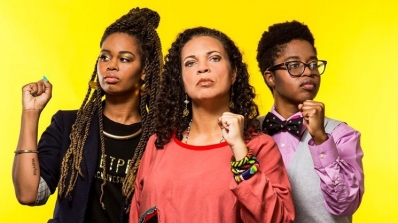 Welcome to the life of Shamell Bell

The Deparment of Theater is delighted to welcome Dr. Shamell Bell, a remarkable visiting lecturer for the fall term 2019.

Shamell Bell will be teaching THEA1: Introduction to Theater at 2A and THEA 21/ WGSS 59.04: Race, Gender, and Performance at 10A. You can register for these courses now!

Dr. Shamell Bell is a mother, community organizer, dancer/choreographer, and documentary filmmaker who received her PhD in Culture and Performance from UCLA's World Arts and Cultures/Dance department. Dr. Bell is currently a visiting faculty at Dartmouth teaching in the department of Theater and the African and African American Studies program. Bell received her M.A. in Ethnic Studies from UC San Diego and B.A. with Honors in American Studies and Ethnicity specializing in African American Studies at the University of Southern California. Her work on what she calls, "street dance activism" situates street dance as grassroots political action from her perspectives as a dancer, choreographer, healer, and scholar. Shamell's research examines street dance movements in South Central Los Angeles through an ethnographic and performance studies lens.

Her dissertation project "Living is Resisting: An Autoethnography and Oral History of Street Dance Activism in South Central Los Angeles" is a hybrid of written text and film. Each genre reveals different aspects of the transformative processes that can turn "choreographies of the oppressed" into "choreographies of the liberated." With direct immersion in contemporary street dance forms from South Central Los Angeles, her work offers an autoethnographic overview of how she developed concepts and practices from her own experiences as a dancer, choreographer, and community organizer. It also provides glimpses of dance in particular social-justice performance events, transcending pathologizing narratives of "gangs" while permitting people in South Central to speak for themselves about their use of street dance and social media as tools to contest detrimental forces in their community and the dominant paradigms shaping their identities. The purpose of the film is to provide visual material and first-hand accounts that weave through, and are inspired by, the written portion of the dissertation.

Her street dance experience includes featured roles in music videos, award shows, and tours. An original member of the #blacklivesmatter movement, beginning as a core organizer with Justice 4 Trayvon Martin Los Angeles (J4TMLA)/Black Lives Matter Los Angeles to what she now describes as an Arts & Culture liaison between several social justice organizations such as the BLM network , Blackout For Human Rights , The Undercommons at UCLA , Los Angeles Students Deserve , among others. Dr. Bell serves on the advisory board of several social justice organizations such as Soteria, a collective creating safe spaces at music festivals.

She also consults for social justice impact in the tv, film, and music industry with credits such as "community engagement consultant" for George Tillman Jr.'s film adaptation of Angie Thomas' best selling book,  "The Hate U Give". In addition, she provides mentorship for aspiring creatives interning with Grammy Award winning singer and songwriter Lalah Hathaway's #realmusicrebels. Shamell consulted as a member of a think tank for actor, activist, and rapper Common's philanthropic company, Think Common. She often teaches alongside her 9 year old son, Seijani, who focuses on meditation and mindfulness. They were featured in Common's supergroup, August Greene's promo campaign for their first single, "Be Optimistic". She and her son also serve as Radical Joy Advisors to "Contra Tiempo," a role created by the Urban Latin Dance Theater Company with a focus on healing, socially astute performance and community engagement.