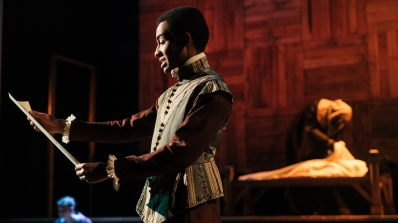 "The Living" in images

SEARCH: ...London, 1665. In the midst of a terrifying and inexplicable epidemic that will ultimately kill over 20% of the city’s population, a handful of residents struggle to respond to the cataclysm that threatens to engulf them. Heartbreaking, bitterly funny, and deeply moving, The Living celebrates the power of courage and compassion to combat a climate of overwhelming fear and darkness.

*Friday November 15 will be an open-captioned performance

Please join us for a celebratory reception following the show. Cash bar available, courtesy of the Top of the Hop Lobby Bar. This event is generously supported by the Hopkins Center and the Adams Family Fund for Theater.

Post-Show Discussion with the Cast
Friday, November 15
The Moore Theater

Join us in the theater immediately following the evening’s performance for an informal discussion with members of The Living cast and creative team.

The Politics of Plague in 2019
Pre-Show Discussion with Dr. Elizabeth Talbot and Director Jamie Horton
Saturday, November 16
7:00 pm @ the Top of the Hop

Please join Dr. Elizabeth Talbot, M.D. and The Living director Jamie Horton to discuss how a play about bubonic plague in 1665 London resonates with today’s international health crises of tuberculosis, ebola, and HIV, and how these connections should empower rather than alarm. Dr. Talbot is an Associate Professor at the Geisel School of Medicine, with particular interest in emerging and tropical infectious diseases, and diseases of poverty. She has been an outbreak investigator for the U.S. Centers for Disease Control and Prevention, the World Health Organization, and the NH Department of Health and Human Services where she serves as the Deputy State Epidemiologist. Professor Horton is Dartmouth’s Director of Theater and an Associate Professor with the Department of Theater. The conversation will be moderated by Laura Edmondson, Associate Professor of Theater. Free and open to the public; this event will be specially recorded by Vermont Public Radio.