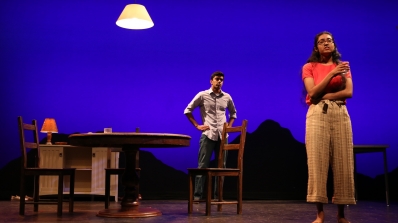 The winning one-act plays will be performed over the course of the weekend of August 6, 2021. Click here for more information about the Frost & Dodd Competitions.

Umma
by Stella A. Asa '22
directed by Olivia Scott Kamkwamba '13
Friday August 6 & Sunday August 8 at 8 pm
'Umma' is the story of a young woman trying to open a record store. It's the summer of '76 in Brooklyn, New York and the times are hot, but she's in love.

Stella A. Asa '22 is humbled and grateful to be recognized with this award. It is an honor to be nurtured and creatively supported within the Theater Department, and Stella continues to look forward to cultivating and collaborating with new and inspiring projects on campus. This award recognizes the hard work, dedication, passion, and utmost respect Stella has for the craft and production of theater, and reinforces her belief that her efforts to pursue theater in her post-grad career are not just a dream but a heartening reality.

The Other Girls
The story of three college-aged women grappling with the intimacy and intensity of female friendships. 'The Other Girls' investigates indistinctions in adoration, admiration, and attraction.

Mia Nelson '22 is a junior from Denver, CO studying English and Human Centered Design. Her writing has been recognized by The Poetry Society of London, Princeton University, The Atlanta Review, Columbia College Chicago, & The Scholastic Art and Writing Awards. At Dartmouth, she is a Teaching Assistant for Engineering 12, a former Historical Accountability Fellow, and a leader in the Dartmouth Outing Club, where she chaired Cabin and Trail and Women in the Wilderness. Previously, she received honorable mentions in the 2020 Eleanor Frost Playwriting Contest and for the English Department's Ralston Prize and American Academy of Poets Prize.

Seismic Change
Zoe wants someone, literally anyone, to take her seriously. Gideon wants to avoid another PR disaster. Ken doesn't want to retire. Helen got her PhD but maybe hates science now? Jason was not told public speaking would be mandatory. Isaiah simply wants the dioramas to come alive at night. It's just another stress-free day at the natural history museum! The museum will definitely not be underwater by 2050 if nobody does anything about climate change. Absolutely not. Everything's fine! Make sure to visit the gift shop before you leave!

Katie Devin Orenstein '22 does not exist. Hopefully she will get to live her life in rehearsal rooms. Dartmouth theater: Into the Woods, Debutantes From Hell, Meat, Little Circles, Family Style. Love to Nick Gutierrez, Mia Nelson, Hannah Gellman, Zea Eanet, Caroline Wong, Bill Nisen, Carl Thum, Kirk Chuggins, Johanna Evans, and her amazing non-theater friends. Special thanks to Stuart H. for being rich and interesting, and to Sean Paul for inventing temperature in 2006 - vital, for a play about climate change. Katie would never have made it to the museum without Patrick, and wouldn't have stayed without Nancy and Phil. She is grateful for the wisdom of countless AMNH staff including Jacklyn Grace Lacey, Susan Perkins, Leah Golubchick, Christina Wallace, Rebecca Oppenheimer, Erin Chapman, and Roderick Mickens.