New York Theatre Workshop empowers visionary theater makers and brings their work to adventurous audiences through productions, artist workshops and educational programs. Every August, the company brings their work to Dartmouth for a three-week residency, developing and performing several new works-in-progress by some of today's most innovative professional playwrights and directors. Recent Dartmouth residency projects have included We Live In Cairo, currently in production at Boston's American Repertory Theater, and Hadestown, which is now running on Broadway and which was recently honored with eight Tony Awards.

The play spins out of the media hailstorm surrounding Lorena Bobbitt, who became a sensation after she used a kitchen knife to cut off her abusive husband's penis in 1993. The tacky dystopia of American pop culture tumbles onto the stage in a series of funhouse vignettes that know no bounds, while The Playwright desperately tries to protect Lorena from the play which has clearly gotten out of her control. 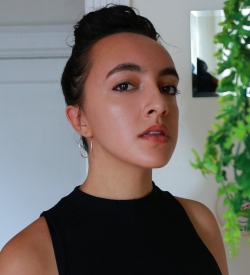 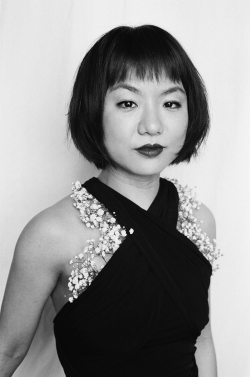 Seonjae Kim is an NYC-based writer, director, and translator from Seoul, South Korea who received her BA at Northwestern University. Her work has been seen at Atlantic Theater Company, Princeton University, Atlantic Theatre Company, Joe's Pub, Playwrights' Realm, The Bushwick Starr, Dixon Place, Williamstown, PEN/World Voices Festival, Rattlestick Theatre Company, Theatre Mu, The New Ohio, The New Group, Bryn Mawr College and University of the Arts among other places. She has received the 2050 Fellowship (New York Theatre Workshop) New York Fellowship (The Drama League), Van Lier Fellowship (Asian American Arts Alliance), Mike Ockrent Fellowship (SCDF), and the Robert Moss Directing Fellowship (Playwrights Horizons.) Seonjae recently completed her first short film, Good Taste, which tackles the fetishization of Asian women and premiered at the Los Angeles Asian Pacific Film Festival. This past year, she assisted on projects by Apple TV+ and A24, and this year, she will be developing a scripted series with Audible as well as serve as the Associate Director of the Broadway musical KPOP. 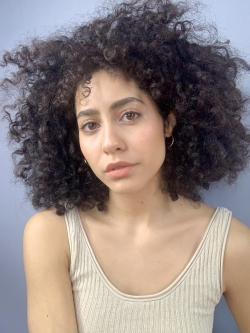 Sharlene Cruz was most recently seen in a recurring arc on the Showtime series FLATBUSH MISDEMEANORS. She also received rave reviews for her performance in Martyna Majok's Sanctuary City at New York Theater Workshop. The New York Times named her one of their 2021 "Breakout Stars". She was previously seen in Hunter Theater Project's critically acclaimed all-female production of Mac Beth adapted and directed by Erica Schmidt. 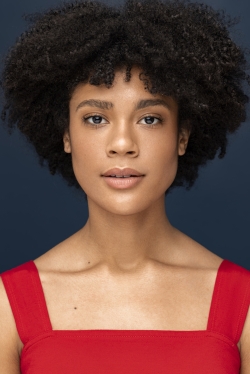 Mya Ison is an actor, writer, singer and aspiring Black studies scholar. Growing up in North Carolina to two immigrant parents, Croatian and Trinidadian, she quickly turned to art as a way of making sense of the world. Her artistic work centers on uplifting and embracing Black women/femmes through theatrical storytelling. She recently graduated from Boston University with a BFA in Theatre Arts-Performance and a minor in African-American studies and will be moving to New York in a few weeks! Recent Roles (Lady M in Mac Beth, Viola DeLesseps in Shakespeare in Love, and Laure in Laure) 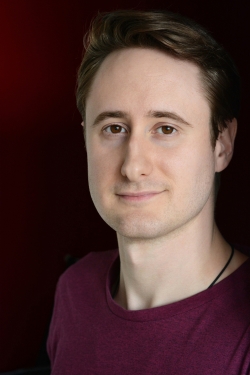 Aubie Merrylees is looking forward to our New England week! Aubie was in Wolf Play at Soho Rep, and before that he was a member of the original cast of To Kill A Mockingbird on Broadway. Other stuff includes: Hamlet in Hamlet and a bunch of parts in Saint Joan (Bedlam), Hand to God (Philadelphia Theatre Company), Stupid Fucking Bird (Arden Theatre), The Liar (Lantern Theatre), A Bright New Boise (Simpatico), The Aliens (Theatre Exile), and The Vinegar Tree and End Days (People's Light). Training: Brown University, Yale University. 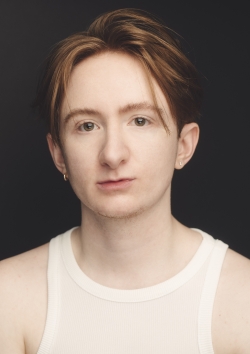 Reed Northrup (they/he) is an actor, writer and educator. They are the voice of Javi on Adult Swim's "Teenage Euthanasia." They have worked at theaters such as Ars Nova, The Flea, Rattlestick, Ensemble Studio Theatre and more. They are a graduate of Yale Drama's MFA Acting Program class of '22 where they were awarded the Pierre-André Salim Prize for "raising the standard of practice in the field." They are represented by Artists First and Aperture Talent. 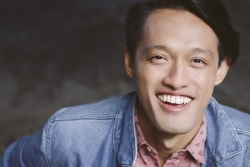 Vichet Chum is a Cambodian American playwright, theater maker, actor, and writer originally from Dallas, Texas and now living in New York City. His plays have been workshopped at Steppenwolf Theatre, Cleveland Play House, the Magic Theater, the Alley Theatre, the UCROSS Foundation, Fault Line Theatre, Crowded Outlet, Second Generation Productions, Weston Playhouse, Cleveland Public Theatre, All For One Theater, Amios, Florida State University, Merrimack Repertory Theatre and the New Harmony Project. He received the 2018-19 Princess Grace Award in Playwriting with New Dramatists and is a current board member for the New Harmony Project. Vichet has been a part of the Resident Working Farm Group at Space on Ryder Farm, the Interstate 73 Writer's Group at Page 73 and the Ars Nova Play Group. Most recently, his play High School Play: A Nostalgia Fest had its world premiere at the Alley Theatre, and he is anticipating the world premiere of Bald Sisters (recipient of the 2021 Laurents/Hatcher Award and the 2021 Edgerton Foundation New Play Award) at Steppenwolf Theatre Company later this year. He is currently working on commissions for Audible, Steppenwolf Theatre, Cleveland Play House, and Merrimack Repertory Theatre. He is a proud graduate of the University of Evansville (BFA) and Brown University/Trinity Repertory Company (MFA). He is represented theatrically by Beth Blickers at APA. vichetchum.com 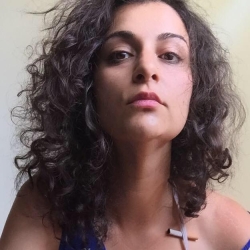 4:00 pm
I love you so much I could die
written by Mona Pirnot
directed by Lucas Hnath 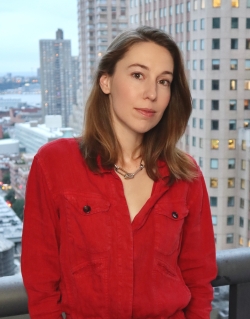 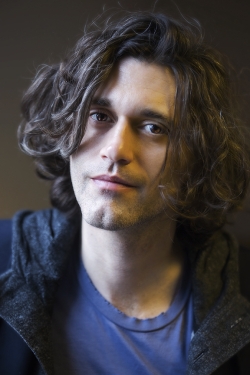 Lucas Hnath's plays have been produced on Broadway at the Lyceum and John Golden; Off-Broadway at New York Theatre Workshop, Playwrights Horizons, Soho Rep, and Ensemble Studio Theatre; and premiered work regionally at the Goodman, Center Theatre Group, Humana Festival of New Plays, Victory Gardens, and South Coast Repertory. He is a New York Theatre Workshop Usual Suspect, a member of Ensemble Studio Theatre, and an alumnus of New Dramatists.

"My first bullet flew swiftly through the head of a would-be Mexican president, cut through a street block, a dance club, a Wal-Mart, cut back through to a past never-ending, cut past and rattled in my brain until it bloomed into these words, into my living." bala.fruta./bullet.fruit. is the second solo show by Jesús I. Valles ((Un)Documents). In the end, bala.fruta./bullet.fruit. asks, "What might be the opposite of a bullet? Where might we find it?" 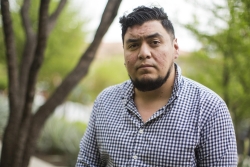 Jesús I. Valles (they/them) is a queer Mexican immigrant writer-performer from Cd. Juarez/El Paso. Jesús has received fellowships CantoMundo, the Palm Beach Poetry Festival, Lambda Literary fellow, the Sewanee Writers' Conference, Community of Writers' Poetry, Idyllwild Arts, Undocupoets, the Poetry Incubator, and Tin House Scholar. Their work has been featured in The New Republic, Palabritas, Quarterly West, Palette, The Adroit Journal, PANK, NPR's Code Switch, The Slowdown, The BreakBeat Poets' LatiNext Anthology, and the Best New Poets 2020 anthology. As an actor, they are the recipient of four B. Iden Payne Awards, including Outstanding Lead Actor in a Drama (2018), and Outstanding Original Script (2018) and they were nominated for the Mark David Cohen New Play Award for their play, (Un)Documents. For their playwriting work, Jesús's playwriting has received awards and support from OUTSider festival, The Kennedy Center, the Kernodle award, and The Flea. Jesús is currently an MFA playwriting student at Brown University. 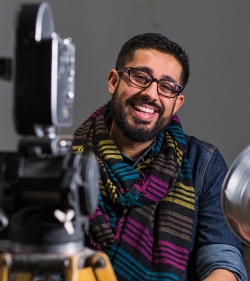 Adil Mansoor is a theatre director centering the stories of queer folks and people of color. His solo performance "Amm(i)gone" adapts Sophocles's "Antigone" as an apology to and from his mother. "Amm(i)gone" is a National Performance Network (NPN) Creative and Development Fund Project co-commissioned by Kelly Strayhorn Theater, The Theater Offensive, and NPN.
Mansoor has developed work with New York Theatre Workshop, The Poetry Project, Bronx Academy of Arts and Dance, Atlantic Center for the Arts, Tofte Lake Center, NYU Tisch, and PearlArts Studios. Directing projections include "Daddies" by Paul Kruse (Audible), "Gloria" by Branden Jacobs-Jenkins (Hatch Arts Collective), "Desdemona's Child" by Caridad Svich (Carnegie Mellon), and "Plano" by Will Arbery (Quantum).
Mansoor is a founding member of Pittsburgh's Hatch Arts Collective and the former Artistic Director of Dreams of Hope, an LGBTQA+ youth arts organization. He has been an NYTW 2050 Directing Fellow, a Gerri Kay New Voices Fellow with Quantum Theater, and an Art of Practice Fellow and Community Leader with Sundance. He is part of the inaugural Artist Caucus gathered by Baltimore Center Stage, Long Wharf, The Repertory Theatre of St. Louis, and Woolly Mammoth. Mansoor received his MFA in Directing from Carnegie Mellon University. 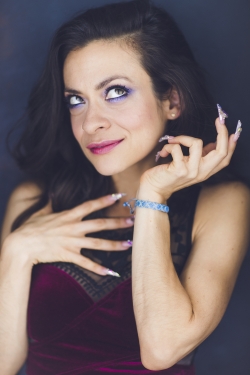