An award-winning original work, directed by Olivia Scott Kamkwamba '13. It's summer '76 in Brooklyn and times are hot, but Umma is trying to open a record store-and she's in love. 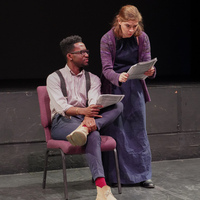 Umma is the story of a young woman trying to open a record store. It's the summer of '76 in Brooklyn, New York and the times are hot, but she's in love. Winner of the 2021 Ruth & Loring Dodd Playwriting Prize. Performance details, artist bios, ticket links, and other info at https://dartgo.org/fd2021

ABOUT THE FROST & DODD PLAYWRITING COMPETITIONS AND STUDENT PLAY FESTIVAL