VoxLab 2022: Osher and the Infinite Curtain

During a week-long Dartmouth residency, alums and other visiting artists develop their works-in-progress in collaboration with current undergraduates. 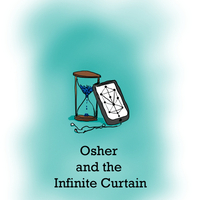 On his deathbed, Osher found spirit in autoplay—as he was hooked up to oxygen and lost the ability to speak, he watched hours and hours of Kabbalah YouTube. The Kabbalah of anger, forgiveness, of loss. He stopped acknowledging the presence of his daughter, Leye, and his husband, Sender. And then he died. Now, months after his passing, Leye visits the local Kabbalah Center, fueled by a desire to understand this change in her father. She reunites with Khonen, a childhood friend, who incites her own series of desires in Leye that lead, eventually, to her possession. In this new adaptation of S. An-sky's The Dybbuk, we travel through time (and web servers) to witness whether Leye and Sender can grapple with the loss of a loved one turned stranger.