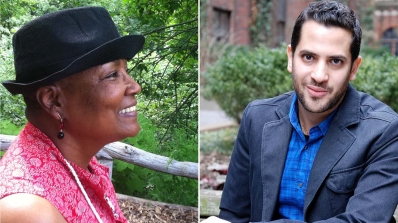 About our visiting directors

Poor Clare
by Chiara Atik
directed by Peter Hackett (read more about this director)
October 29 at 8 pm
Clare is just a regular noblewoman living in medieval Italy, trying out hairstyles and waiting to get married. Until an unkempt man named Francis starts ranting in the courtyard... A breathlessly funny & powerful spin on the Middle Ages that tells a very modern story of what happens when your eyes are opened to the injustice of the world around you - and you can no longer look away.

Saturday Night/Sunday Morning
by Katori Hall
directed by Kemati Porter (read more about this visiting director)
October 30 at 8 pm
Miss Mary's Press and Curl beauty parlour and ladies boarding house, Memphis, Tennessee. As World War II draws to a close, a group of young Black women whose lives have been upended by war and shifting social attitudes must navigate the nuances of love, sexuality and sisterhood. A hysterical and achingly beautiful work from award-winning playwright Katori Hall.

Ridgway
by Charlie O'Leary
directed by Kareem Fahmy (read more about this visiting director)
October 31 at 5 pm
Decades ago in Western Pennsylvania, a gay love triangle ended in a murder in the woods - or so it's rumored. But when a white journalist brings his Latino partner home to investigate, the past and present start to look eerily similar. A ghost story about who can - and who can not - live safely in rural America.